The main stop for tourists in Chiapas, Palenque doesn’t yet have the feel of being overrun by them. But I was one, and I went there for the same reasons so many others do, to climb the sprawl of brownstone Mayan temples rising in the rugged jungle setting, that includes the sarcophagus of the 7th century Mayan king Lord Pacal eighty steps deep in the Temple of Inscriptions and the intricate series of rooms that make up the crumbling, majestic Palacio. After that I knew Misol Ha, the hundred-fifty foot high waterfall twenty kilometers outside Palenque, and Agua Azul, the cascades of sparkling blue water fifty kilometers away, were beautiful spots to go to cool off in the steam-bath heat.

Before doing any of this I needed to eat, and on the first morning, satisfied with my large room and shady balcony at the Hotel Chablis, I went to Restaurant La Canada, a fifty foot walk from the front gate. Its bamboo covered terrace seemed the perfect spot for the breakfast I’d visualized since emerging from a shower; fresh ensalada di fruta and hot cakes. Coffee too. A succession of cups, negro.

Half an hour later I was finished, the plates clean as after a washing, and I made a silent promise to return for more of the same the next day. Nourished, abuzz with caffeine, eager to start climbing the temple steps, my waiter, a wide, sturdy man with coal-black hair, placed the small brown tray with my bill on it down on the white table cloth. Lifting a hip to retrieve the pesos to cover it, a glance at the total made me aware it was more than I’d expected to pay. The amounts for each item on it were greater than the ones I remembered seeing on the menu I still had a fuzzy view of in my mind. It wasn’t the first time that had happened during my weeks in Mexico City, Oaxaca and San Cristobal, but now I wanted to contest it. This isn’t right, it bubbled in me to say. Looking at the waiter, whose eyes seemed focused on a place far away and long ago, the feeling passed. The difference in pesos was about a dollar equivalent, and an overwhelming cheapskate feeling kept me from asking to see the menu again. Let it go, a little voice in my head repeated. And that’s what I did, left the amount and a tip without comment and forgot about it the moment I went looking for a collectivo to take me to the temples.

The next morning, Agua Azul in my plans later on, I sat down to a different menu than the one I’d been handed the previous day. This was printed in English, not Spanish, and had a different set of prices, the ones I’d seen on my bill the day before. I estimated them to be fifteen to thirty percent more, depending on the item. Coffee, my drug of choice in Mexico and every other country, was fifty percent higher. So that was it: I had the revelation many others must have come to before me. Restaurants had a Spanish menu they gave to locals with one price list and another for U.S. and European tourists with different prices on it.

The conclusion I was being taken advantage of so blatantly changed my expression from puzzlement to resentment. It was a minor local transgression but one I thought had resounding universal implications for Mexico and the United States. There’s distrust, dislike and dishonesty among the people of these two countries that didn’t begin and end in Restaurant La Canada. And it spoke loudly: take as much of the gringos money as you can in the same way they use our labor for as cheap as they can get it.

The waiter must have seen this flash of interior enlightenment reflect in my eyes, and the subsequent change in mood that came over me. His own eyes dropped to the cement floor and he took half a step back as if to give me room to think about what to do next. Ask to see the Spanish menu? I could do that. But what if he shook his head no? What would I do then? My Spanish wasn’t good enough to discuss the matter with the thoroughness and diplomacy that would be required, so I didn’t argue, and ordered instead, ensalada di fruta and heuvos rancherous. After eating I left the amount and a tip and went on my way.

Later on, back at the Hotel Chablis, I justified my inaction and the two menu system as the translation price and the slightest start to Mexico’s economic equality with its northern neighbor. I went back for more the next morning. Paid the gringo tourist prices too. Left a generous tip, and this pleased my waiter very much. 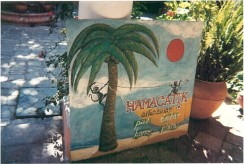